One of the most appreciated in the world, Italian food culture is a very important aspect of country's history. An old and rich tradition influenced by Greeks and Romans habits, that has become increasingly relevant thanks to discovery of the New World and the following importation of ingredients like corn, peppers, potatoes and tomatoes, among the most used in today's local cuisine.

For Italians, food is not only a human need but something to be slowly savored, a moment to enjoy, an opportunity to bring together the whole family or friends, a way to rediscover old traditions handed down through centuries. Italian inhabitants love to spend long and relaxed time eating: especially on Sunday, a meal could spread over two to three hours.

Its main meal of the day, called “pranzo” (lunch), is based on minimum three courses like appetizer, first plate and second plate, while some people prefer to eat a fresh fruit or dessert to the latter. In special cases, like the large Sunday lunch, each guest uses to bring a homemade dish in addition to the menu. 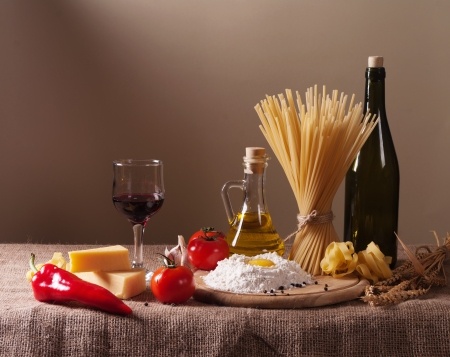 Italian gastronomy is well-known for its diversity and vastness: in fact, each of Italy's twenty regions boast exclusive typical recipes (such as “Polenta”, most used in northern cities) and products (like buffalo mozzarella in Campania or parmigiano in Emilia-Romagna) that make you experience a very huge variety of dishes traveling from city to city, feeling just like you've travelled across the whole European continent.

The secret hidden behind Italian food culture is its simplicity: chefs usually focus on ingredients quality respecting the traditional recipe, without trying to embellish it with unnecessary additions. In fact, some of the most important Italian dishes are made only of four to eight ingredients, without much attention to appearance but only to its taste.

One of the basic (but important) rules about Italian cuisine is to cook seasonally, choosing between fresh available ingredients: in fact, local people would never eat artichokes, asparagus or mushrooms out of season! Furthermore, Italian gastronomy is one of the few to put on an equal footing ingredients like meat, fish and vegetables.

Of course, bread plays a fundamental role in Italian gastronomy, where the first place is for pasta. Since the early first steps in Italy history, bread has been the main food of poor people thanks to its modest but very nutritious ingredients: flour, yeast, water and salt.

Today, there are more than a hundred variants of bread spread throughout the Italian food culture, which differ in flavors, shape and ingredients. One of them is "focaccia", which has been the first kind of dough to be used later for creating pizza recipe.

Bread is served with almost every meal in Italy in both restaurants and homes, making a delicious perfect pair with several kind of meat and fish-based typical Italian dishes, or to better taste cheese, oils and sauces.

Describing all the typical products of Italy in a fast Italian food guide is really hard. However it's possible to list the typical dishes that make Italy so famous throughout the world.

Thanks to its cuisine culture, Italy can be considered the best example of slow food nation.

Italian Tradition and Food - An Explosion Of Taste

Like in other countries, there's a strong connection between Italian tradition and food.

Italian food history has deep roots, and it has developed over the centuries passing unscathed through many political and social changes.

Italian breakfast foods are many. Regularly consumed, within a balanced diet it has a positive influence on lifestyle and health.