Italian Ham - You Won't Resist To It

The Italian ham is one of the most popular foods in the world. If an Italian is asked which part of the animal is more delicious, almost all will point the "filetto".

In ancient times, the slaves who captured a beast , they could eat it, reserving to the owner the "thigh", a word that is used for different animals, while for the pig and the wild boar uses the word "prosciutto (ham)", which is the part that most adapts to be "salted" and therefore more easily preservable.

Today to prosciutto are attributed different features: in addition to goodness and fragrance, it has gained an unique and exclusive place on Italian tables. In accordance of its properties it's recommended to everyone, due to its content of salts, fats and proteins. It's easily digested and assimilated. 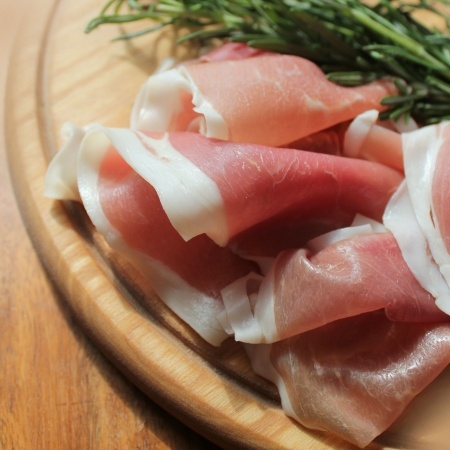 Usually in Italy it's divided into two types: the "Crudo" and the "Cotto"one. The "Prosciutto Crudo" is tasty and aromatic when presented with its portion of fat at the edges of the slice. It's obtained from the processing of a pork leg, salted, flavored and finally subjected to aging in special places.

Its introduction seems to date back to the Longobards who introduced the seasoning of Italian ham. The "sweetness" is typical of the products in the colder regions, where the amount of salt to preserve it is smaller and therefore, it's more salty in warmer regions. In the grocery, a good Italian Prosciutto Crudo must have an intense aroma and white fat, pink meat and must not be sticky.

Currently in Italy there are different types: Prosciutto di Parma, San Daniele, Prosciutto di Modena, Prosciutto Toscano, the Veneto Berico Euganeo and the Norcia ones. It's typically eaten by itself with toasted bread, accompanied by mild cheeses and full-bodied wines. But it can be a valuable ingredient in "Tortellini", in sandwiches or even on pizza.

The "Prosciutto Cotto (Boiled Ham)", however, is obtained from the hind limb of the pork, which is dissected, defatted, boned, massaged and worked, then steamed. The first people to think of cooking the pork thigh were the Romans, who boiled with plenty of dried figs and bay leaves, then covering it with honey and cooking it with a crust.

Originally, the it was widespread in the North of Italy. It was delicious food, worthy of the lords of the boards, excellent ingredient of sumptuous recipes. The recent history of this ham is the story of a great commercial success, It has progressively introduced in Italian kitchens and small groceries of the country, to be a valid alternative to the Prosciutto Crudo which was considered the Italian ham par excellence.

The most famous is the Parma one, sweet and delicate, although there are different varieties and even smoked or stuffed (often with pistachios or peppercorns). Prosciutto Cotto is easier to digest and much more versatile than Crudo one as an ingredient in preparing various dishes. Often it's diced into pasta recipes or baked in pies, rustic pizzas, rolls and cold sandwiches.