In the past the only Italian oven used was the wood one while nowadays the market offers countless models. Indeed, to obtain a good bread, dough is not enough: even baking process is one of the key steps for successful. Even domestic ovens, with some changes can become good sources of heat for the baking of bread, baguettes and rolls.

Each of them has its inner characteristics but what mostly distinguishes a oven compared to another is the system by which the heat is transmitted and which can be of different types: for "run" (as the heat migrates from a hot body to a cold one), for "convection" (when heat is send by liquid and gaseous particles to a cold body), or even for "irradiation" (when heat is transmitted by electromagnetic waves).

Many are the places (bakeries, stores or even housing) where the oven is a basic element and gives the bread different perfumes and fragrances according to the material with which it is built (for example, the stone oven) or to the heat source used in cooking. 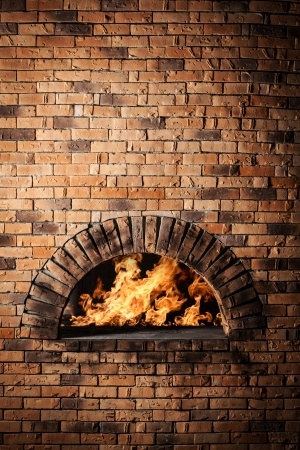 The most suitable type to intensify and enhance the flavor and fragrance of baked goods, and surely the first among the different Italian ovens is the "wood" one. This ability is solely attributed to the wood one, no other type of ovens can do it. Also because the materials of which it is composed, often lava stone or brick make each oven different from the other.

It's even possible to choose which perfume to give the combustion chamber / area, by simply changing the type of wood. The woods like the branches of olive, walnut, hazelnut and a few sprigs of juniper are particularly suitable.

From an environmental point of view, it can be considered "eco-friendly", as the wood is a renewable source and the carbon dioxide produced is the same purified from the plant during its growth. The particular baking of this oven improves the preservation of the bread.

Who would not rather have a wood oven can certainly use its more widespread replacement: "Electric" oven. Among its advantages is the possibility to select its heat diffusion (from top to bottom, from bottom to top, or both): this function is particularly useful not only to bake bread but for other foods.

However, selecting the resistance allows to bake bread with both initially and then, in the final stage, use the only one at the base so this Italian oven will not roast the surface of the bread and to go on baking.

The "Electric / Gas Deck" and the "Rotary" ovens are the most common types in professional bakeries. The first is characterized by a number of overlapping horizontal rooms. The bread produced with this one quickly bakes in the beginning, it has a more pleasant taste than rotary (where the cooking chamber is vertically placed), a more intense color on top and bottom but the shapes do not cook uniformly (which is consistent instead with the rotary one).

Here in my website I will give you tips and recipes to bake with the regular electrical oven that I also have in my kitchen.