Italian Tradition and Food - An
Explosion of Taste

Like in other countries, there's a strong connection between Italian tradition and food. While some kind of foods are traditionally eaten in several periods of the year because of their ingredients seasonal availability, others are of course related to particular holidays or religious reasons.

For example, Catholic religion imposes not to eat meat on every friday of the year, also on Ash Wednesday (occurring 46 days before Easter) and Good Friday (observed during Holy Week, on the Friday preceding Easter Sunday), rather preferring fish or vegetables-based dishes.

The most important holiday periods in Italian gastronomic culture, the ones that offer substantial changes in daily eating habits, are basically three: Carnival, Easter and Christmas. While there are some famous holidays recipes in common for the whole Italian territory, each of the twenty regions has its traditional recipes that are being cooked over and over again since years. 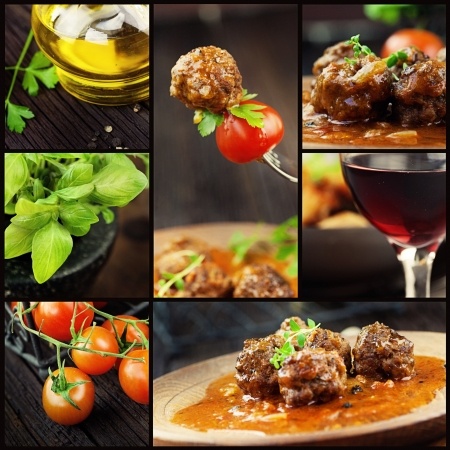 From Easter Dove to Christmas' Pandoro

The first typical event in Italy is the Carnival, which offers the well-known first plate called "Lasagne di Carnevale", typical of Southern Italy, a recipe that includes mozzarella, tomato sauce, eggs, meatballs, ricotta and meat sauce. Also related to Carnival are several types of pastries, like "Castagnole" (based on eggs, sugar, flour and butter, fried in hot oil) and "Chiacchiere" (based on eggs, sugar, flour, vanilla and grappa), or cakes.

Following immediately is the Easter, holiday that makes large use of eggs (synonymous of fertility, eat them symbolized the resurrection of nature), lamb meat (that is related to Christ sacrifice, the "Lamb of God") and vegetables (such as "Carciofi alla Giudia", based on artichokes and pepper) to create some of the most important traditional recipes. Among the desserts, the most appreciated are the "Easter Dove" (similar to "Panettone") and the classical "Easter Eggs" (based on dark or milk chocolate).

Christmas is surely the most representative relationship between Italian tradition and food. While Christmas Eve is typically based on fish dishes (like Lombardy's Eel, Marches' Stockfish, Campania's Spaghetti with clams), Christmas Day offers a wide selection of recipes based on meat and vegetables. Typical desserts includes the most-famous "Panettone" and "Pandoro".

An Italian Recipe For Anything

Also related to Christmas holidays is the New Year's Eve, which usually offers both fish and meat-based specialities like Seabass (served with bacon, onions and orange, with sweet and sour sauce) or "Cotechino" (sausage usually served with lentils, it's said to bring luck in the new year).

Other minor festivities includes Valentine's Day, International Women's Day and "Festa dei Morti" similar to Halloween, that despite its American origins has became more popular in Italy in the last years (Originally it was the holiday to remember the dead and ancestors). Also in these cases there are some connections between Italian tradition and food, like Valentine's Day, in which are very common chocolates and pastries, or Women's Day, during which is popular the cake called "Torta Mimosa", made with yellow sponge cake cubes in order to emulate the mimosas flower.