Potato Bread Recipe - The Softness
Of The Bread

Potato bread recipe offers the possibility to make a type of very smooth bread but with a crunchy crust. Potatoes aim to make it soft and sweet, therefore suitable for making sandwiches both sweet and savory. 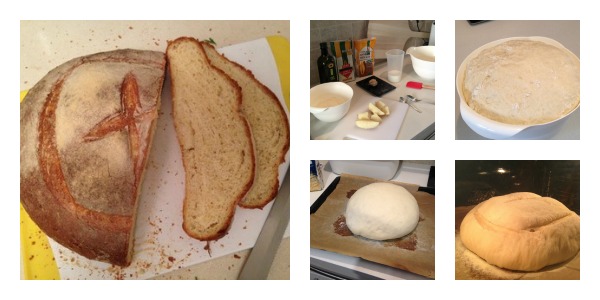 Being similar to the "sliced bread", it can also be made with the bread machine. For those who doesn't have one, dough can be done manually or with a mixer.

Potato bread can be stored for a few days in a cotton bag (or special for bread), wrapped with paper or frozen.

Step 1: Boil the potato in a saucepan and when it is cooked allow it to cool, peel and crush it with a fork or potato masher. In the while, mix half of the flour with 2/3  of the milk in a bowl and let it rest 40 minutes. Melt the cube of fresh yeast in the rest of warm milk.

Step 2: Pour the rest of the flour in and add the boiled smashed potato, olive oil and malt. Add now, following the Potato bread recipe, the warm milk with the yeast and knead for few minutes. At the beginning the dough will seem stiff. Add the salt and knead until the dough will become soft and a bit sticky.

Step 3: For those who have the bread machine, just put in order the following ingredients: warm milk with the melted yeast, salt, malt, oil, boiled potato and the flour. Then, set the "dough + leavening" program.

Step 4: Let the dough rest in a bowl covered with a cloth or a plastic wrap, until doubled in volume, about 2 hours. For those who make the dough with the machine this step is not required.

Step 5: Tip the dough on a working surface, after having sprinkled it with some flour. Put it down gently to degas, then fold it to give it the shape of a loaf. Cover a pan with baking paper and put the loaf on it. Cover it again and let rise for another 45 minutes.

Step 6: When leavening is finished, preheat the oven at 500° F. Make some cuts on the surface of the loaf with a razor blade. Put the pan in, turn the temperature down to 440° F and bake potato bread for about 40 minutes. When Potato bread is cooked, remove it from the oven and put it to cool on a rack.

Potato bread recipe is now complete. In the case of a bread machine with a cooking program included, then select the desired cooking and browning program as described in the instructions book and wait for "end" beep signal.